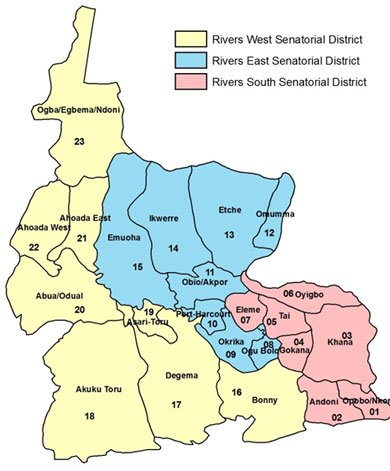 Rivers State, also known simply as Rivers, is a state in the south south region of Nigeria and was formed in 1967. Rivers State is bounded on the South by the Atlantic Ocean, to the North by Imo, Abia and Anambra States, to the East by Akwa Ibom State, and to the West by Bayelsa and Delta states. Its capital is Port Harcourt.

Rivers State is nicknamed the “Treasure Base of the Nation” is on Nigeria’s coastline and has a number of seaports.

Click on the link representing the location you wish to look-up in Rivers State to reveal its postal code / zip code: